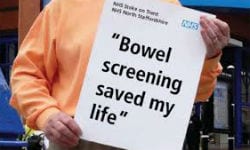 Findings from Imperial College London suggest eating a balanced diet, keeping physically active and maintaining a healthy weight were associated with an improved likelihood of survival. The large European Prospective Investigation into Cancer and Nutrition (EPIC) study, published in BMC Medicine, analysed data from 520,000 men and women from 10 countries over six years. Of these men and women from the study, 3,292 were diagnosed with bowel cancer.

The study participants completed questionnaires about their medical history, diet and lifestyle at the start of the study, while height and weight measurements were also taken.

The researchers developed a scoring-system based on body weight; physical activity; food and drinks that promote weight gain; plant foods; meat-based food; and alcoholic drinks. Women were also scored on whether or not they had breastfed. The greater the number of healthy behaviours a person had, the more highly they were scored.

Results indicated the higher the score, the lower the risk of death – a trend that was observed in both men and women.

Having a healthy weight and high consumption of plant foods had the strongest associations with survival.

There was also an association seen with women who breastfed and improved survival. While this has been observed for breast cancer before, it is the first time it has been seen in bowel cancer and this initial finding is not sufficient evidence to show a protective effect of breast feeding on bowel cancer​.

But the study could not demonstrate what would happen if the healthy lifestyle habits were acquired after cancer diagnosis.